As a distributed system, Riak runs well both on-prem and in the cloud. Riak also integrates with Apache Mesos to add a level of resource abstraction that efficiently distributes workloads across a unified pool of datacenter resources.

Riak has developed a Riak Mesos Framework to make it easy and efficient to deploy and manage Riak clusters with Mesos.

CLUSTER MANAGEMENT MUST BE EASY

Whether your Riak KV deployment is 5 nodes or 500 nodes, you need to scale easily on demand. Your Big Data application won’t wait for you to deploy yet another server. With the Riak Mesos Framework, you can easily optimize resource utilization and scale Riak clusters on demand.

Using the Riak Mesos Framework, it is trivial to create a cluster, add nodes to the cluster using CLI and view the status and configurations of the nodes via pre-integrated Riak Explorer.

The Riak Mesos Framework is typically deployed as a marathon app via a CLI tool such as riak-mesos or dcos riak. Once deployed, it can accept commands, which result in the creation of Riak nodes as additional tasks on other Mesos agents.

The Riak Mesos Framework coordinates with Mesos to keep large Riak KV clusters connected and running. The Riak Mesos Framework Scheduler will spread Riak KV nodes across as many different Mesos agents as possible to increase fault tolerance. If there are more nodes requested than there are agents available, the Scheduler will then start adding more Riak KV nodes to existing agents. 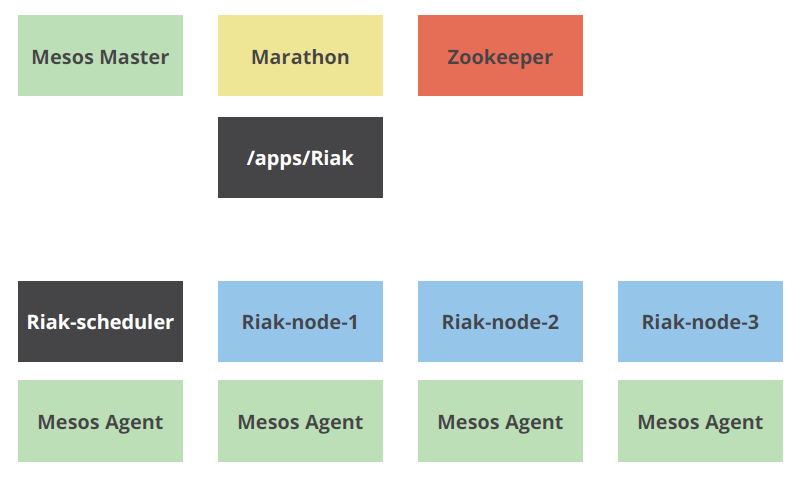 Applications outside of Mesos can communicate with Riak on Mesos via a smart proxy called the Riak Mesos Director. Due to the nature of Apache Mesos and the potential for Riak KV nodes to come and go on a regular basis, client applications using a Mesos-based cluster must be kept up to date on the cluster’s current state. Instead of requiring this intelligence to be built into Riak client libraries, a smart proxy application named Director has been created, which can run alongside client applications. 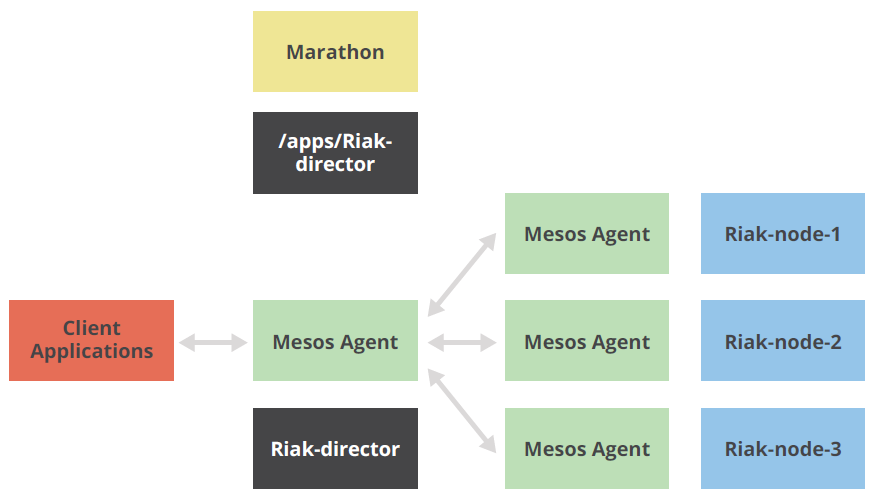 Take a self-guided tour of the Riak Mesos Framework.

Using Riak KV with Mesos, you can easily scale out data services to provide the fast and flexible scale you need to meet peak demand.

With thousands and even millions of users, your data must be available for read and write operations. Riak KV and Mesos let you easily manage your clusters and your data.