Recently, Riak held a roundtable discussion in San Francisco with Riak’s CEO Adam Wray and some of our technology partners, including Mac Devine, vice president and CTO of emerging technology at IBM; and Benjamin Wilson, product line technical director at Raytheon; as well as local media and analysts. The conversation focused on some of the technology challenges and promising rewards presented by IoT initiatives. Many initiatives are still in the testing or experiment stage and haven’t yet been fully deployed. Riak organized the roundtable as a way to uncover some of the ways companies have taken IoT initiatives from concept to large-scale implementation.

In this second of a 3-part series, we’ll discuss the importance of having factually correct data for creating successful IoT projects, especially pertinent due to the data replication involved with distributed systems. Don’t forget to check out the first part of the roundtable series: Cognitive IoT at the Edge.

Devine started the conversation by defining the need for factual, objective data: “The vision around IoT is to make real-time insight based on complete and accurate data. The goal is to take objectivity out of the data set. If you look at the large enterprise customers, many times they’re making decisions based on subjectivity because they do not have the ability to handle the volume of the data or to handle the velocity of the data insight needed.”

Benjamin Wilson, product line technical director at Raytheon, added how, despite advancements in the way companies build distributed architectures, tactical markets “have a harder hard time sharing and collaborating at the edge. We have radars that detect something akin to baseballs hit out of a stadium from hundreds of miles away1, but the data exchange of consistent factual data across such systems is also very challenging.” Part of the reason this dichotomy exists is because, Wilson continues, “a lot of these systems today are passing information around the distributed computing systems with legacy approaches,” leading companies like Raytheon to “set out [its] effort on how do [they] better communicate across the battlefield, across operations, across systems to really enable new operational capabilities that are meaningful.” 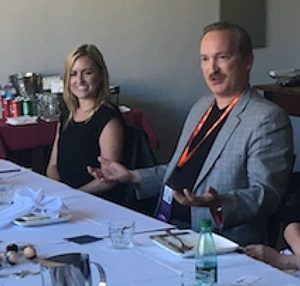 Devine continues by explaining the need for complete and accurate data. He discusses a project with the Weather Company and airplane sensors. “We put [turbulence] sensors in aircraft and analysed the data for insights. What we found was that when we looked at the pilots that had a military background they were consistently under-estimating  turbulence while pilots with a civilian background consistently over-estimated turbulence. The experience and background of the pilots brought subjectivity into decisions. This subjectivity was costing the organization time and money. So they changed their approach and they started listening to the data.”

Because as long as there is subjectivity in the equation, you will not be able to make objective business decisions that will drive your business to the next level.

It’s still early days for IoT, but even now there are some really low-hanging fruit in the tree that organizations can go after. Pursuing those projects requires a mentality that avoids getting caught up in the latest and greatest technology. Instead, they must focus on the problem they’re trying to solve, how they can solve it in a sustainable, scalable way that takes subjectivity out of the equation. Because as long as there is subjectivity in the equation, you will not be able to make objective business decisions that will drive your business to the next level.

That’s not a knock on current processes. Adam Wray, for instance, highlights: “that until recently, it was not cost effective or optimal to move around this amount of data or collect this amount of data at the edge, where IoT data exists. Now that these kinds of initiatives are possible, “you’re going see a lot more of those type of innovative use cases, where the technology has opened up new business models for optimization, for insight,” much like IBM and Raytheon have demonstrated.

For more on how Riak can help enterprises manage data generated by IoT use cases read IoT Is Changing Everything.