Datomic is a distributed database system that supports queries, joins, and ACID transactions. Through its pluggable persistence layer, you can wire Datomic up to a horizontally scalable key/value store that strives for operational simplicity, like Riak.

(Want to hear more about Datomic? Check out the Riak Community Hangout with Stuart Halloway of Cognitect.)

Below, we’ll explore the specifics around getting Riak enabled as a storage service for Datomic. We will also provide you with a Vagrant project that automates many of these steps, so you can have a local development environment with a Riak-backed Datomic running within minutes.

Datomic stores indexes and a log of known transactions in its storage backend. You can think of the indexes as sorted sets of datoms, and the data log as a recording of all transaction data in historic order.

Both of these pieces of data are stored as trees with blocks that are roughly 64K in size. The blocks themselves are immutable and cater very well to the strengths of eventual consistency. Other bits of data, like the root pointers (for the trees) for indexes and the data log, require the ability to compare-and-swap (CAS). They need to be stored in a strongly consistent backend.

We won’t go through the details of standing up a ZooKeeper ensemble here, but once you have, make sure you have a list of IP:PORT pairs for each instance (at least three recommended for production usage).

Note: is coming in Riak 2.0 and will make ZooKeeper unnecessary for this use case.

Riak is a distributed key/value store with an emphasis on high availability. To learn more, download the free eBook, A Little Riak Book.

To get started with Riak, head over to the and walk through the setup of a five-node cluster.

In Datomic, the Transactor component is responsible for coordinating write requests and is a critical single point of failure. Think of the Transactor the same way you think about a relational database. You need one, but you may also want another ready to go if the primary fails.

The Transactor needs to know a few things about Riak:

At this point it’s assumed that you have a ZooKeeper ensemble, Transactor instance, and Riak cluster ready to go. Now, fetch your list of ZooKeeper nodes and supply it (comma delimited) as the payload of an HTTP PUT request to Riak like so:

Now all of the components can talk to each other! 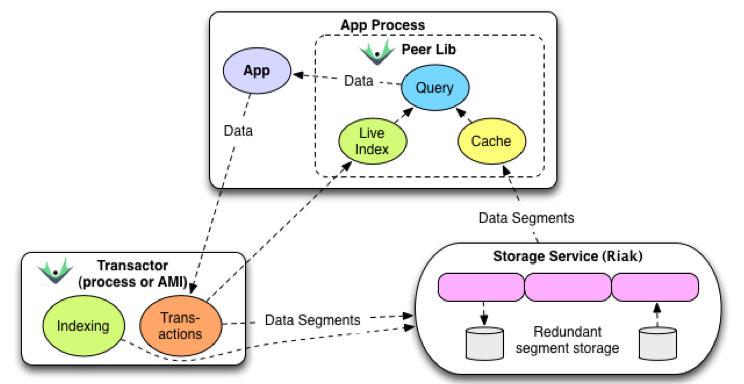 Simply clone the vagrant-datomic-riak repository and execute the following:

Within a few minutes, you should have a functioning local development environment. To test, install the Datomic Peer Library and walk through the tutorial.