Last month we released Riak 1.2 , with a number of improvements in Riak stats, the protobufs API, LevelDB backend and repair/recovery capabilities. Riak 1.2 also features a new strategy for making cluster changes like adding and removing nodes. With the new approach, Riak allows you to stage changes, view the impact on the cluster, and then commit or abort changes. The increased visibility lets Riak operators make more informed decisions about when and how to scale up, scale down and upgrade or replace nodes. Additionally, you can now make multiple changes, like adding a number of nodes, at the same time – critical for large-scale clusters.

In prior versions of Riak, users made changes to the cluster using commands under the “riak-admin” syntax. To add or remove a node to the cluster, you would simply call “riak-admin join” or “riak-admin leave,” and the Riak cluster would immediately begin to handoff data and ownership as appropriate. While this approach was simple, it did raise two issues we’ve tried to address with the new cluster management capabilities:

We addressed both of the above issues with a new approach we’re calling ‘Staged Clustering’.

In Riak 1.2, instead of joins, leaves, etc. taking place immediately, they’re first staged. After staging cluster changes, you can view how the changes will affect the cluster, seeing how ring ownership will change and how many transfers between nodes will need to occur to complete the transition. After looking at the plan, you can then add or remove changes staged to be committed, scrap the plan, or execute it as is. 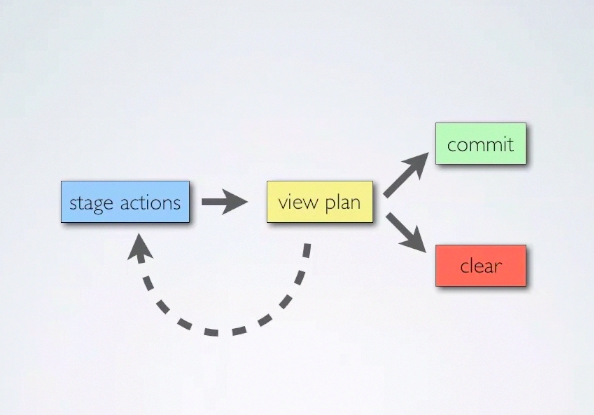 The ‘Staged Clustering’ interface is implemented in Riak’s command line tool, riak-admin, under the ‘cluster’ command. Underneath the ‘cluster’ command are subcommands used to stage, view, and commit cluster changes (e.g. to join the current cluster to node dev1, you’d use: ‘riak-admin cluster join dev1’ ). You can read more about the new syntax in the Riak Wiki. Currently, the new approach to cluster management is not implemented in Riak Control, our open-source management and monitoring GUI, but is planned for a later release.

Let’s take a look at how the new cluster management strategy would work in a scenario where we wanted to add three nodes to an existing node (dev1) to form a four-node cluster.

First, we call ‘riak-admin member_status’ to get a view of the current cluster, the nodes in it and their current ring ownership:

The joins are now staged for commit.

3. View How Staged Changes Will Affect the Cluster

Now we can use the new ‘riak-admin cluster plan’ command to see the impact of the joins on the cluster, viewing changes to ring ownership and transfers that need to occur. 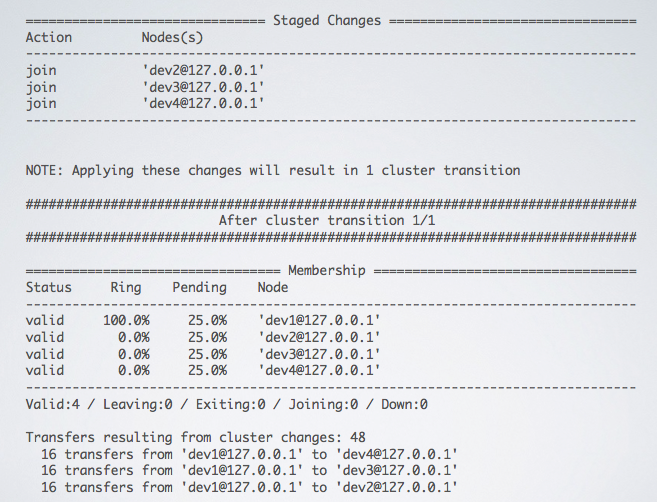 If we want to commit these changes, we use the commit command:

These changes start taking place immediately. If we run ‘riak-admin member_status’, we can see the status of the transition. Additionally, we’ve fleshed out the ‘riak-admin transfers’ command to give you much more visibility into active transfers in Riak 1.2.

For more in-depth information on the new cluster management stuff in Riak 1.2, check out this recorded webinar with Riak engineer Joseph Blomstedt and the updated docs.