For more background on the indexing techniques described, check out our blog “Index for Fun and for Profit“

The War Against Zombies is Still Raging!

In the United States, the CDC has recovered 1 million Acute Zombilepsy victims and has asked for our help loading the data into a Riak cluster for analysis and ground team support.

The future of the world rests in a CSV file with the following fields:

For each record, we’ll serialize this CSV document into JSON and use the National ID as the Key. Our ground teams need the ability to find concentrations of recovered zombie victims using a map so we’ll be using the Zip Code as an index value for quick lookup. Additionally, we want to enable a geospatial lookup for zombies so we’ll also GeoHash the latitude and longitude, truncate the hash to four characters for approximate area lookup, and use that as an index term. We’ll use the G-Set Term-Based Inverted Indexes that we created since the dataset will be exclusively for read operations once the dataset has been loaded. We’ve hosted this project at Github so that, in the event we’re over taken by zombies, our work can continue.

In our load script, we read the text file and create new zombies, add Indexes, then store the record:

Our Zombie model contains the code for serialization and adding the indexes to the object:

Let’s run some quick tests against the Riak HTTP interface to verify that zombie data exists.

Next, let’s query the inverted index that we created. If the index has not been merged, then a list of siblings will be displayed:

Excellent. Now we just have to get this information in the hands of our field team. We’ve created a basic application which will allow our user to search by Zip Code or by clicking on the map. When the user clicks on the map, the server converts the latitude/longitude pair into a GeoHash and uses that to query the inverted index.

Colocation and Riak MDC will Zombie-Proof your application

Our zombie model does the work to retrieve the indexes and build the result set:

Saving the world, one UI at a time

Everything is wired up with a basic HTML and JavaScript application: 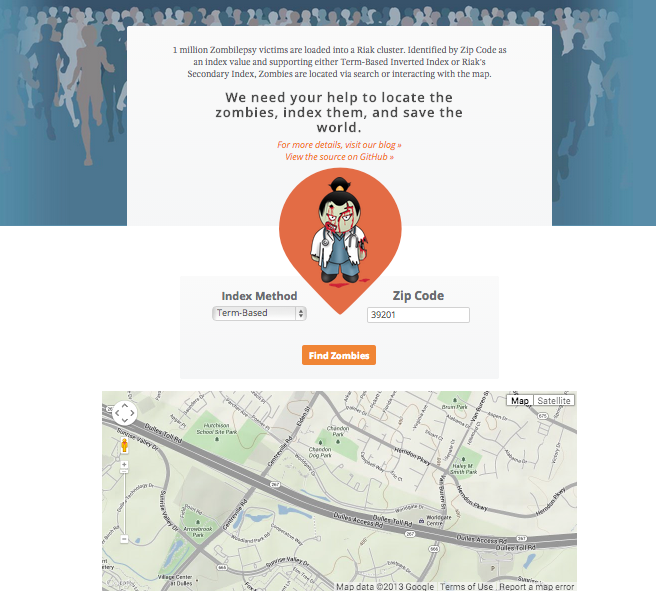 Searching for zombies in the Zip Code 39201 yields the following: 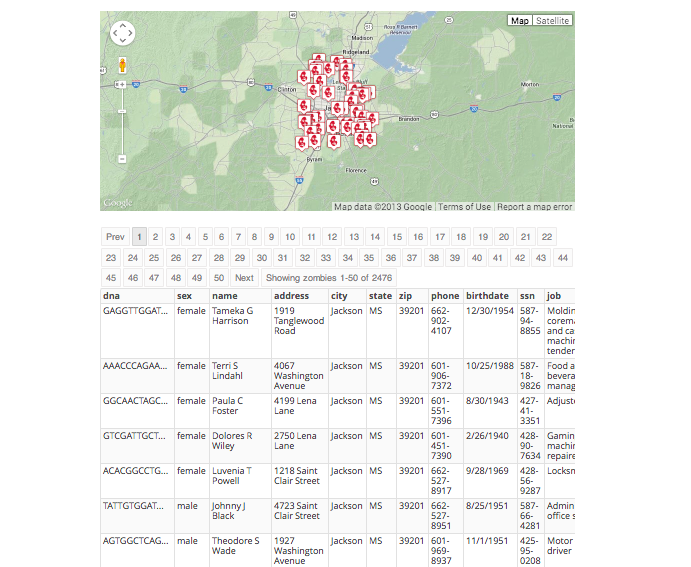 Clicking on Downtown New York confirms your fears and suspicions:

The geographic bounding inherent to GeoHashes is obvious in a point-dense area so, in this case, it would be best to query the adjacent GeoHashes.

There is plenty left to do in our battle against zombies!